Most of the epithelial cells polarise because of distinct morphological and biochemical characteristics which associate with different surfaces of these cells. Generally an epithelial cell has three domains which relate to various surfaces of the cell; these domains are: an apical domain, a lateral domain and a basal domain. The morphological and biochemical characteristics of different domains determine the functions of these domains.

The apical domain is the region of the epithelial cell facing the lumen of an enclosed cavity or a tube. This contains ion channels, carrier proteins, hydrolytic enzymes, and aquaporins (channel-forming proteins that function in the regulation of water balance). In many epithelial cells, the apical domain shows special structural modifications, which enable this domain to carry out its functions. These structural modifications include microvilli, cilia and stereocilia.

These are small, slender, finger-like projections found on the free surface of epithelial cells in a variety of locations. Individually, the microvilli are too small to be seen with the light microscope. The electron microscope reveals that the microvilli are plasma membrane-covered cytoplasmic extensions, 1 to 2 pm in height and about 0.1 pm in diameterEM shows that each microvillus contains a central bundleof 20 to 30 microfilaments (actin filaments) which are cross-linked at regular intervals by the actin-binding proteins fascin and fimbrin.

The microfilaments anchor to the plasma membrane at the top and sides of the microvillus. The microfilaments extend down into the apical cytoplasm, where they become embedded in the terminal web. Within the terminal web the actin filaments become associated with the molecules of spectrin and myosin-II. The columnar epithelial cells lining the luminal surface of small intestine bear numerous microvilli on their free surface. In histological sections examined under LM, the intestinal mucosal surface appears vertically striated and is, therefore, referred to as striated border.

Microvilli also occur in large numbers on the luminal surface of the cells lining the proximal convoluted tubules of the kidney. In this location they are longer and appear as a brush borderon light microscopic examination.

Microvilli greatly increase the surface area of the cells in correlation with an absorptive function. The interaction between the actin filaments of the microvilli with the myosin-II molecules of the terminal web results in oscillatory contractile movement of the microvilli which facilitates the absorptive process.

Cilia are hair-like processes found chiefly on the free surface of those epithelial cells which specialises for transport 0f fluid or a film of mucus over the epithelial surface. Due to the capability to make rapid to-and-fro oscillatory movements, cilia refers to as kinocilia to distinguish them from stereocilia which are nonmotile processes. Cilia are readily visible under microscope, measuring 5-10 pm in length and about 0.2 micrometer in diameter. In the human body, the kinocilia are principally found on the tall cells of the pseudostratified. columnar epithelium of the conducting part of the respiratory tract, and the simple columnar epithelium lining the uterine tubes.

In addition, kinocilia are also found on the neuroepithelial cells (hair cells) of the sensory regions (maculae and cristae) of the internal ear. EM reveals that the shaft or free part of each cilium contains a core complex or axoneme which encloses by a plasma membrane which, at the base of the cilium, becomes continuous with plasma membrane of the cell from which the cilium arises. 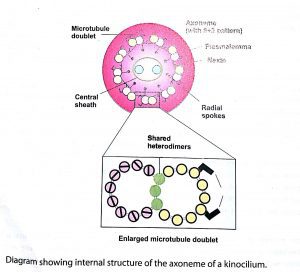 Each A microtubule of the nine doublets connects to the central sheath by a radial spoke which composes of an elastic protein. On the outer surface of the A microtubule are present tiny hook-like arms, which are made up of the motor protein dynein. When activated by ATP, these dynein arms make temporary cross-bridges with the microtubule B of the adjacent doublet. This results in ciliary movement by sliding of the doublets relative to each other. The microtubules extend from the tip of the cilium to its base, which is known as basal body and is located just inside the free surface of the cell.

In the living epithelial cells, the kinocilia beat rapidly in  a specific direction. Each kinocilium stiffens during the   more rapid forward or effective stroke, whereas it bends during the slower recovery stroke. Successive cilia in each row begin their beat in sequence so that each is slightly more advanced in its movement than the cilium behind it in that row. This sequential activation of cilia results in the formation of waves that sweep slowly over the epithelial surface resulting in propulsion of a layer of mucus, fluid, particulate matter, or ovum over the epithelium.

Under the light microscope these structures appear as thin, hair-like structures which are seen to be in contact with each other to form small tufts. Under LM they appear to resemble cilia but, because of their incapability to exhibit movements in the living cells, they were given the special name of stereocilia (stereo=solid, implying nonmotile). Electron microscopic studies reveal that the stereocilia are actually unusually long microvilli containing the central bundle of microfilaments.

Because the stereocilia are very long, they are flexible and wind around each other towards the tip, which results in the tuft-like appearance seen under the light microscope. Average length of a stereocilium is 30 lim. Because the name stereocilia is confusing and misleading some histologists prefer to call these structures as stereovilli.

Like the microvilli, the function of stereocilia in the duct of the epididymis is to increase the surface area to facilitate the reabsorptive process. However, in the internal ear and taste buds, the stereocilia function in nerve signal generation.

The epithelial tissues are characterized by close packing of the cells and, hence, the lateral domain of each epithelial cell lies in close contact with lateral domain of the neighbouring cells. Two main functions of the lateral domain are: (1) cell adhesion, and (2) cell communication. The function of cell adhesion is dependent on three factors: (1)presence of cadherins (adhesive glycoproteins) in the lateral plasma membrane of the epithelial cells, (2) presence of invaginations and evaginations in the lateral plasma membranes, due to which the cells presence of adhering and occluding cell junctions between the adjacent cells. The function of cell to cell communication is served by the gap junctions (nexus).

The basal surface of epithelial cells is characterized by the presence of three important features: (1) basal lamina, (2) hemidesmosomes, and(3)infoldings of plasmalemma. The basal lamina (also called basement membrane) is a thin layer of extracellular material that is located between the epithelial cells and the underlying connective tissue. 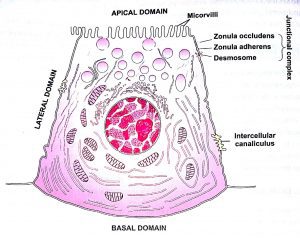 Basal lamina under the electron microscope:

Under the electron microscope the basal lamina is seen to consist of two layers or laminae: lamina lucida and lamina densa. The electron-lucent layer lying, just beneath the epithelium is called lamina lucida. It is about 40 nm in thickness and consists mainly of adhesive glycoproteins laminin and entactin. The lamina lucida is seen to be crossed by loosely arranged delicate fibrils of collagen type IV, which extend from the lamina densa to the basal plasmalemma of the epithelial cells.

The lamina densa (40 to 60 nm thick) consists of densely packed fibrils of collagen type IV. In addition, it contains the adhesive glycoproteins laminin and fibronectin, and a proteoglycan called perlecon.

Functions of the Basal Lamina:

1.It serves to bind the epithelial cells to the underlying or surrounding connective tissue.

2.The basal lamina provides the epithelial cells a flexible support capable of stretching and recoiling according to the functional requirements of the body part or organ.

3.It serves as a molecular sieve or ultrafilter, Generally the basal laminae are freely permeable to small molecules but impede the passage of macro- molecules. This property is of special importance in the glomerular capillaries of the kidney, where the glomerular basal lamina is the single most important factor preventing the loss of plasma proteins into the urine.

4.The basal lamina serves as a scaffolding during the epithelial regeneration or wound healing.