Einthoven’s Triangle is an equilateral triangle drawn arbitrarily around an area of the heart, apices of which is represented by the right arm, left arm and left leg. 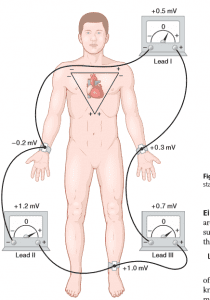 If the electrical potentials of any two of the three bipolar limb leads are known at any given instant, the third one can be determined by summing the two.

(1) Impulse is originating at SA node It spreads over atria

(3) There is no defect of conduction

(4) Strength of contraction, mass of atrial musculature, and its nutrition are normal

(5) Impulse arrives at AV node at the summit of P wave. Abnormalities of P Wave

(5) In nodal rhythm direction of P W is reversed. Abnormalities of QRS Complex

(3) Prolonged QRS complex: caused by Hypertrophy of or dilation of left or right ventricle and block of Purkinje system

(4) Bizarre or odd QRS complex: caused by destruction of cardiac muscles in various areas and its replacement by scar tissue  and block in conduction of impulse in Purkinje system

Current of injury causes an initial record (below in I and above in II and III) before QJZS complex,

Point at which potential of ECG is exactly zero, is called J point,

when ST segment and TP segment of ECG arc not at the same potential level, it is called ST segment shift.

When current of injury is present.

It is a record of electrical activity of heart obtained with a catheter containing ring electrodes at its tip that is passed through a vein to right side close to the tricuspid valve.